On Saturday morning 16 members of the Spen Valley Scout & Guide band boarded a coach to head down to the NIA in Birmingham to join the rest of the National Youth Marching Band.

The band got together on the morning for a quick run through of the music being played, once again under the direction of Major Paul W Norley MA (Class Stud) BA (Mus) LRSM LDBBA CNCB MCGI CAMUS who is the Director of Music to The Band of The Brigade of Gurkhas.

The band then moved onto the arena for 3 hours of rehearsals with the rest of the cast, the finale rehearsal is an impressive sight in itself. 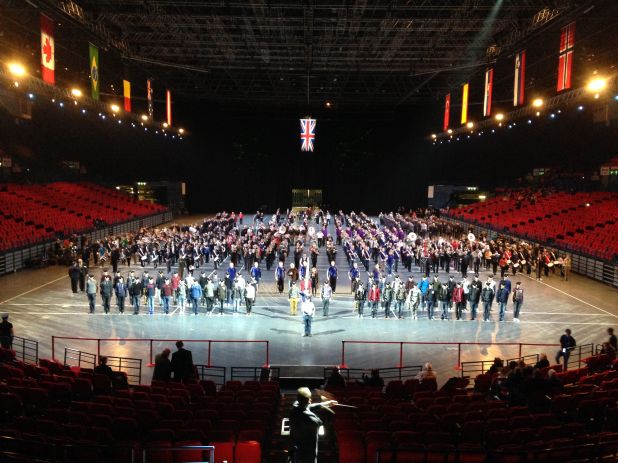 After a long rehearsal uniforms are prepared and and put on ready for the show. The band opened this years Tattoo with the British Legion march on, followed by the National Anthem and marching the standards off to Yo Nepali as a salute to the Brigade of Gurkhas.

The band then made a return to the arena for the Finale playing alongside the Band of the Royal Air Force Regiment, The Royal Band of the Belgium Navy, The Slovenian Services Band and the Norwegian King’s Guard Veterans Band.

Stopping overnight the band returned to the NIA to do it all again on Sunday to yet another sold out audience of over 7000 people.

A great time was had by all and the band members once again proved their professionalism and were a credit to Scouting and the Spen Valley District.